In a Lover's Lap. 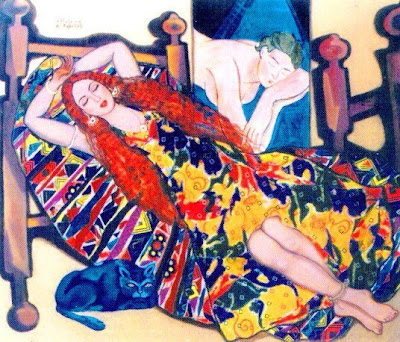 I have often seriously wondered if Love is ever possible under Occupation.
I mean, just ponder on the word Occupation. Take your time, am in no hurry, we have Time on our side...all of it.

I am sure you have heard the following expression - He/She is too occupied to love.

So tell me, is Love possible when one is so occupied ? Can the heart find that vital vacant, empty space to beat that extra beat ? Does an occupation occupy the Heart too ?

I personally feel very occupied. Invaded and occupied. Whatever passion I had has turned into a refined hateful anger... A well polished one. And oh, so necessary !

People think that they insult me when they call me "hateful." They prefer at best, gratitude and at worst indifference, less intimidating, I suppose.

But hey, you have your lot of grateful ones playing jesters for you. And another lot of indifferent ones whose worlds revolve around their pockets and belly. You own them. Surely you can't own it all.

I am making certain that you will never own my hatred. Hateful - I am, and you are constantly ensuring its legitimacy, transforming it into a Higher Law. An 11th commandment - Thou shall hate your occupier with all your heart.

Some argue that "hate" is consuming me. Of course it is, and what a beautiful, blissful feeling it gives me. A smooth, velvety, unhampered, raging fire that moves me, unceasingly so...until your presence is no longer.

But am no fool, this wonderful gift is to be used wisely -- context and timing. But then I always need to remind myself that Time is on our side. All the time in the world. And Context is our play field. We choose the best time to efficiently "hate" you.

So after all, it may be that " Hate" is nothing but a true Love, under Occupation.

Things are never what they appear to be. Is that not so ?

Sway Me Smooth, Sway Me Now...

On Nudity and the Geography of the Body... 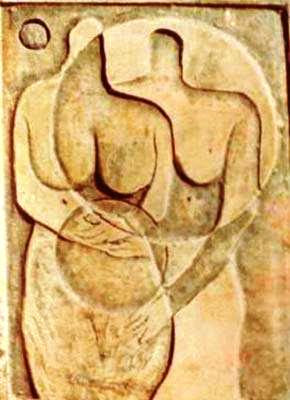 I do not wish to sound macabre or morbid, but Death is always on my mind...Some days more than others...A butterfly that no one catches, but one that can catch anyone...impromptu.

I think this has been triggered by the loss of one of my good friends, the loss of Mahmoud Darwish -- adding themselves to the long "anonymous" list...Loss after a loss.

And some losses are simply irrecuperable...Something changes in us, some unnamed thing. And forged in the fire of separation and loss we are moulded...

Clearly, when one meditates on Death, one's thoughts are automatically directed to one's Finiteness. One's transient passage here and transient it is. A waiting room.

I remember when one member of my family passed away and was buried according to the Christian rites, arguments about how to dress him took place. Which tie and which suit, which shirt and which belt he should be wearing...

I was flabbergasted, left speechless...What does it matter? I thought to myself.

But then I had learned from being brought up in a multi-religious background, not to interfere in people's rites and beliefs however nonsensical they were...As long as they were not imposed upon me and the rest of the collectivity.

I personally, have opted for the Muslim rite. I told my brother and mum, "if I were to leave my body one day, kindly bury me in some Muslim land."

I added by saying that "at least according to Muslim rites, you don't have to argue about how to dress me..."

In the Islamic tradition, we die naked. We are shrouded with a piece of white cloth and buried in the earth where our physical bodies ultimately belong. None of this coffin business. Besides, I am too claustrophobic to spend the rest of my days stuck in some wooden box. I need space - the vast space of the Earth, where that body can ultimately rejoin its original element, like the plants and flowers...and the worms.

Of course this "morbid" subject got me thinking about nudity...How naked we all are.

We are born naked and we die naked.

Nudity, the ultimate undressing. The last mask that is taken off.

Nudity is all about vulnerability. The two are flip sides of the same coin. Even if we realize it not.

When one is naked, one is vulnerable...Covers and Protections are synonyms.

So naturally, my thoughts took me to American Torture...where one is stripped of one's cover, of one's protection.

It is not to just humiliate, no. It is designed to make you vulnerable, to strip you of all barriers and leave you totally exposed...To force you to recall your natural shyness and your unconscious reaching out for the fig leaf, while they abuse you...

Nudity is a very intimate affair. It throws you back to those first days when you were expulsed, ushered out of another coffin - like place, called a womb.
Except you were immersed in water and maybe you had a good time there, depending on who your Authority was and what "uniform" she was wearing when carrying you in that intra-uterine space...

So naked and exposed you were, and terribly vulnerable and you know it, even today.
But some pretend otherwise...They pretend invincibility.

All kind of shit goes on between two naked bodies. They like to call them lovers, more propicious for the upcoming St.Valentine's day.

Power is everywhere...and when two naked bodies meet, it is no benign encounter. That nudity covers and hides away the darkest corners beyond the body...But then you know it already, because you feel it at play...But you pretend otherwise.

But like in Death, in Torture and in "Love", there comes a moment when you simply surrender...And your nudity becomes what it was always meant to be, revealing itself to you and the "Other"...whoever that "Other" is...and there is always an "Other".

Hence the Geography of the Body. The frontiers, the borders, the limits, the fences...

The Body becomes the Land and the land becomes your protection. And when you are stripped naked of it, you start writing posts about Nudity and Death...