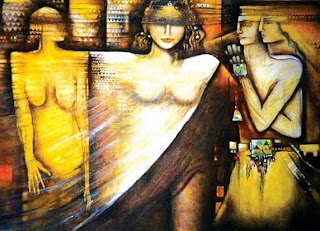 Women have always been powerful, but they have amputated their powers...to seek the approval of men and to please them. The results have been disastrous on both a personal and collective level.

I frankly don't understand why women need the approval of men so much. What is about a guy's approval that will bless or curse you ? Fuck them. You are what you are, if he likes it fine, if he does not like it, he can go and find an idiot like himself, who will play the game...

I get very irritated with female emotional dependency. He doesn't fancy me, he doesn't like me, he stopped loving me, he's not into me...Fuck that shit.

These are the questions you need to ask yourselves...not the other way round.

I do realize that women have been socialized through years of bullshit that men are the center of their universe, the center of the THE universe. This is a myth. This is how power was taken away from you. You believed a lie and you perpetuate the lie daily...by your behavior, your attitude, your attire, your despondency...

End result, you become the first victims. The first victims of male power. Be it in war or in peace...but specially in war. Ask any Iraqi woman and she will tell you all about male "power" gone insane...

There are different types of power and different levels of power...but this is a blog not a thesis...I am hoping that anyone who reads this will understand subtleties and nuances...and not take words and definitions literally.

I am a firm believer in the theorem that things start on the inside...true power comes from within first, at a deep self, soul level...and then extends outwards...

As I said there are different types of power and different levels of power...

Power is one thing and force is another. Men are not powerful, they are forceful.

Force is primarily physical and it stops there. Hence women as victims of force, what ever that force is (physical force, weapons etc...) their victimization is almost always related on a first level i.e the body. This is where men exercise force...but not power.

Cumulative, unquestioned force becomes power, a low level quality of power...it's like you have lead and gold. Lead is a low quality metal, gold is not. Get it ?

Male force manifests itself in its negative aspect as physical/sexual harassment, battering, rape...

A teacher friend of mine, is adamant at the beginning of every school year to firmly encourage female students to protect themselves physically by following self defense classes. I am all for it myself.

Brute force needs to be reckoned with brute but well directed, well channeled force. So am all for martial arts for women. I have myself taken several classes in martial arts and if you see me, you would never guess it.

Women need to defend and protect themselves....on a physical level, from men, be it fathers, brothers, husbands, lovers, or a stranger on the street.

That is one level. The basic level.

Once that is under the belt, so to speak, there is nothing more to fear...I have to distinguish here between times of war and times of peace. Obviously am talking of times of "peace"

What am trying to say is don't depend on the man to protect you, because that same man who is capable of protecting you, is also capable of using force against you.

Not terribly romantic I know, but then life is not romantic...if it were, you would not have books and songs revolving around romance. People would LIVE romance instead of writing or singing about it.

Getting back to power...

I have news for you women, you don't need to be empowered, a fashionable term these days...empowering women...you are ALREADY powerful, and you have forgotten all about it.

Tap into it...make the EFFORT to do so....tap into your own power reservoir and use it wisely...very wisely.

Your lives will turn around, I promise you that.

I am not sure I want to keep the uncensored blog open to the public anymore. I really need a private space for me alone and I feel some are prying a wee bit too much into it...this is is the distinct impression am getting. I'll give it a couple more days and will take a final decision. I've deleted all the followers of this blog. Sorry folks - I'm in a hermit, seclusive, hibernating mode.

My instinct tells me it should be closed down to the public and I think this is exactly what I am going to do.

Apart from that, I am feeling quite drained. Jumping from one tragedy to another - plight of Iraqi children, then Iraqi deformed babies, now the execution of 126 women and in between documenting stories about the theft of Iraq's antiquities, plus translating articles into English, plus reading articles in Arabic regarding Iraq and having to sift through them and sift through the information, plus following Iraqi sat TVs for fresh news, plus following news on Twitter and re-tweeting, not to mention responding to pending emails and direct messages, plus writing posts...
Am a Reuters all by myself and am fucking exhausted !!!

Then I ask myself, who gives a damn anyways. I can publish 1000 stories and people may or may not read...some will get excited, will get a buzz and it will all fizzle out in the end...until the next post...

In the process, I've been terribly neglecting my family, my social life and my love life. Z's patience has run out and he is furious. I don't really blame him. I would be too, if I were him. My family is getting quite impatient with me too, since am hardly ever available. As for my friends (none virtual ones), well they gave up on me. Whenever anyone of them calls, I start the conversation with - I know, I know, you are absolutely right, am a horrible, aloof, anti-social woman. That sorts of shuts them up from the word go.

The internet is not that different from "real" life.

What will they not do to discredit me.

But Iraq, She keeps me going...I must be doing something right.

Next time I receive one more threat, all the names and related info will go online...for all to see. And it will not stop there either...
Posted by Layla Anwar at 11/15/2009

Corruption for me is like the state of Rot. Being corrupt is being rotten. Rot starts slowly, and then erodes the whole self...I've come face to face with Corruption and Corrupt people...there are plenty of them around. Maybe they don't even realize how corrupt they are. How spiritually bankrupt they've become. Or maybe they do...I will never find out. I just see their Corruption staring me in the face.
From the grocery store to the director general...
The rot starts with a lie, with the intention of deceptiveness...and it grows, and takes on a life by itself...
It starts small, a white lie, a "clever" move to outsmart and acquire a small gain, probably something most pathetic...and it grows and grows...and overtakes the whole person...

The facade, the outer veneer is kept well polished...with the culture of Piety...religion has not touched beyond the first layer of the skin. It has remained on the epidermis...and will remain that way, until each and everyone starts getting honest with themselves.

But being so far down the tunnel of Corruption...I don't see how this can ever happen.
Posted by Layla Anwar at 11/06/2009