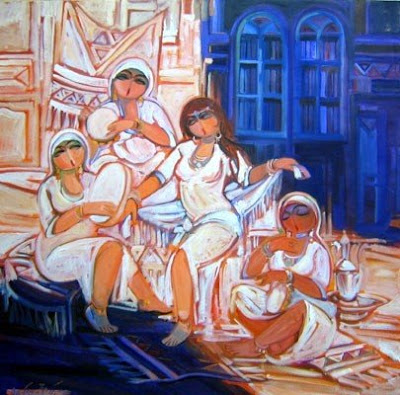 You know something ? I love dancing...and am told am a good one too. And ONE of the reasons, I find the current puppet regime in Iraq not only corrupt but borrrrrrrrrrrring is because they have banned dancing places. Dancing is no longer allowed in Baghdad...except in the Green Zone, of course --- leisure therapy for the poor worn out brave boys and girls from the Wild West.

I remember the good old days in Baghdad, we could dance...You name it we danced it. No one thought we were "loose" because we danced...and boy did we swing.

And please don't bore me with your usual leftist crap about "only the bourgeoisie was allowed to dance". Even the riff raf danced...but today, they channel their energies differently, they kill instead - because the Ayatoilets from Qum declared dancing to be Haram. Dancing is haram but drilling, raping, torturing and murdering people is not.

Sod them, I love dancing -- and I have always said it there are two ways I'd like to go - either in bed or on the dance floor.

Okay, I retract - not in bed... that would be quite confusing for the meaningful other, and would very likely trigger off a deep existential angst summed up in one sentence -- the fine line between coming and going.

Away from such macabre, morbid thoughts. Damn they follow me everywhere. I wonder why...

Anyways, I was listening to this radio station that plays oldies. I love oldies. Maybe because am getting old myself...kind of a quick maturing...sod them, I don't care. We're all getting there...sooner than later.

So I was listening to this station and they played that song - a song that took me back to when I was 4 years old.

I remember my parents taking me on a cruise trip...

I was bored with adults, but being rocked by the sea and waiting for mermaids to appear would fend off my boredom...and there was not much to do for kids on this cruising ship, except dress up in dentelle and sit on high cushions, otherwise I could not reach my fork and knife, keep my elbows off the table and wait for dinner to be served...I can't remember the food, it must have been very bland.

But there is one thing I will never forget from that trip - a memory that vividly comes back to me when I hear that song...

Dad tucked me in bed and said :

I heard their voices and laughter coming from the upper deck...there was a gala dinner that night...and they played some music. It sounded as if they were all having some real fun and here I was cooped up in this claustrophobic cabin, forcing myself to be a good girl...

I got restless, and the mermaids did not show up either...I slipped out of my bunker bed, and tipped toed, all the way up to the upper deck. I remember I had a pink nightie with millions of little flowers adorning it...my hair was a mess, all disheveled and I was barefoot...

As I climbed the narrow stairs, the music and the laughter got louder, so did my heart beat...I peeped through the main door and saw everything glittering and whirling...I pushed the door open and discreetly walked in the gala room...making sure to remain unnoticed...I reached the band. They had brass instruments shining like the sun and I stood behind one of those huge loudspeakers, trying to remain incognito...

A man spotted me...He was the captain of the ship. He must have been around 40 or more...He looked very handsome in his navy blue suit and shiny silver buttons, scintillating like stars, and his elegantly placed navy cap...I remember he had a bit of grey hair on the sides...

He approached me and put out his hand, bending forward to reach my tiny height...

And he took me by my tiny hand and the band played that song...and that was my first twist. I twisted away, barefoot, in my pink nightie with a captain for a chaperon...It was heavenly...

She rushed towards me followed by my father...The captain said "allow us to finish this dance, please.". And we did...

More people gathered to watch this little Iraqi girl dancing barefoot in her nightie...I got a nice series of applause, the captain kissed my hand and said
" good night mademoiselle "

Mother pulled me aside and started reprimanding me -- "how dare you ?" ...father joined "did I not tell you not to move ?!"

I looked up at them and replied with indifference "I did not move...my legs took me there...I had nothing to do with it..."

"And in a nightie and barefoot ? What will people think ?"

I shrugged and thought to myself in not so many words - sod them, I had the best chaperon on board...

I was tucked in bed again, this time they locked the door...but I cared not, I saw mermaids, from my cabin window...twisting in the water, dancing around in joy...