Ramblings on Arab Men -- Part I 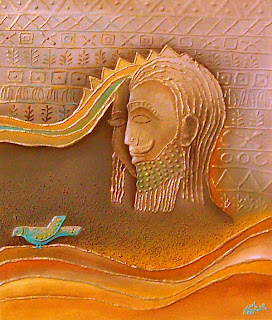 A controversial topic, certainly so. Controversial for a multitude of reasons, some personal, other political. And a bit of both really.

Also controversial, because anyone can turn around and say "surely you can't generalize that way." True, to some extent. But surely I can generalize, insofar as I can reveal socio-cultural TRENDS that make Arab men despite and in spite of their variations, more or less the same across the board, regardless of exact geographical location, class, status, education, religion...etc.

Of course one can argue that what you are about to read is ALSO applicable to men worldwide. My reply would be yes, to some extent, in various degrees.

HOWEVER, the topic at hand is Arab men ONLY, for tonight at least.

Now the personal controversial bit is caused by several factors.

Firstly, an inner one -- which you may call some form of loyalty. Not really a misplaced loyalty but a loyalty that derives from the glaring fact that Arab Men as they stand today, are really, socio-politically speaking, quite impotent.

Let me clarify this further. For instance, when I look at a picture of an Iraqi man, a father, a husband, a brother, a relative or a friend -- stripped of his dignity, home, family, belongings, livelihood, education, rights...

When I see him lost, confused, overwhelmed with responsibilities, anguished about his own future and that of his family, his wife, his children...

Do I really have the ethical right to talk about their oppressiveness, their repressiveness, their double standards, their cluelessness in interpersonal skills, their patriarchal narcissism, their authoritarianism -- all in relation to gender ?

What I mean is, can I really broach the subject now ? Is it the right time ? Can I afford rocking the boat even more, when I see gigantic waves flooding and swallowing it all ?

I am taking the Iraqi man and/or Palestinian man as a starting point, because they as males in the Arab world, are direct recipients of a brutal, ruthless Occupation.

I say to myself -- It is not like life is honky dory in this part of the world, and we have solved all our problems, so we can relax, sit back and discuss gender issues. After all, our men are getting massacred left right and center, and thrown in prisons, dumped in morgues and streets, without the luxury of a decent burial.

These are the kinds of thoughts that preoccupy me when I think of gender matters in the Arab world.

And of course, by extension, I think of all the problems that assail the rest of the male population in the Arab World - economic insecurity, a heavy load of responsibilities for the immediate AND extended family, authoritarianism and abuse in the work place, poor access to education/training, medical services, poor wages, lack of political rights, etc. Of course, all what I have enumerated above comes in different degrees, depending on class, background, status, rural, urban...etc.

Yet, despite my being quite conscientious of the predicament that the average Arab man finds himself in, I still can't help but notice a common denominator, that does cut across the social, economic and political conditions, he (the Arab male) finds himself in. That common denominator is his treatment of Women. In other words, GENDER - except maybe for his mother. Ah! Oedipus, where are you my son ?!

I think a whole post, chapter, book should be devoted to the relationship between the Arab son and his Mamma. Am sure Hebrew, Persian, Turkish, Latin and Greek Readers would identify with this bit too. I suppose that would include the Indian subcontinent as well and parts of Asia, and Africa. So I guess it is not strictly some ethno-psychological Mediterranean/Middle Eastern thing.

Anyways, let me not sidetrack here, I will let these other people deal with it, their own way.

Again, I want to be very fair here. The word "treatment of women" is not accurate.
Because if I really look at the statistics, there are more abused, battered, raped, women in the West than in the Arab world. So I really need to be careful in my choice of words.

OK, let me go back to basics. Maybe that will elucidate the rest.

The ONE area where the issue of control, double standards, licentiousness, laxness, traditionalism, conservatism, authoritarianism, in sum the ugly face of Patriarchy is most felt, is in the area of Sexuality.

I guess that is going back to basics, right ?

To simplify it for you, grosso modo, with a deliberate generalization on my part to make a point (this does not mean I am unaware of the nuances and the differing degrees), if you want to really see where and how gender "inequality" takes root, it has to be in the area of Sexuality, again in the broad sense of the term.

This is turning out to be a long essay, already. To be continued...And am sure you are eager to read the rest. Just pray that I don't get lazy on you and myself.

And by the way, this might prove to be a totally inconclusive "study" and an exercise in futility. Who knows ?