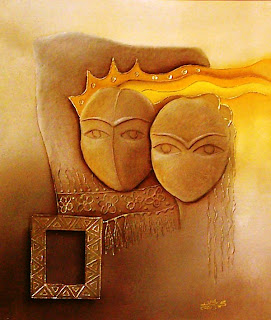 Mashallah, he's a boy, they would all exclaim. Mashallah indeed.

A dick in gold ? Not yet, but they will erect one soon in his honor.

Fathers and mothers, please don't frown, it's a girl. You can also erect a statue if you wish. Yes, I know you are smiling, but why do I see the disappointment in your eyes ?

Oh what a burden on your shoulders, dear parents. That slit, that tiny slit, so much cause for worry, for angst and for ultimate rejection.

Oh, but he's a boy, there is no real need to worry. He's safe, he will become a beast himself, and who can fear for a beast ? OK, he may not turn into a real beast, but a metaphor of a beast or maybe a Tarzan, or the prodigal son...

No bicycle, no horseback riding, no playing, no mixing, no talking, no smiling, no laughing, no life...Be a good girl. Uncross your legs, pull down your skirt, put a scarf on your head, lower your gaze, disappear...Yes, disappear, you are too much trouble...you are the cause of all Fitna, of all Chaos. Let us tame her, let us domesticate her, let us clip her wings, let us pretend she is not there, let us pretend she is a boy...

Me, practicing favoritism ? No way. Am not that way.

So why did you frown when you saw a she and not a he ?

Ah, women, too much of a headache. They have needs, they feel, they cry, they quiver inside, they ache and they pain..." You are too emotional, you are paranoid, you are too much" and the message is -- Be a man now !

But the prodigal child is no girl. He will grow to be a "man". Sure, he will be inculcated with some "laws" but with the implicit understanding that he can break them...or trespass them, or do away with them. After all, they are his laws. Made by little boys who grew up to be "men" just like him. Surely there must be some hidden understanding there, some unspoken consensus. Push the laws to absurdity, and God becomes a HE, and only a HE, and everything falls into HIS image.

A capricious, jealous, possessive, God, who hates women. And the seed of misogyny is planted.

Let me get personal here.

When growing up, I used to hear it often, from the females surrounding me, family, neighbors, friends, and they would say - "Makoo aleh harraj, huwa walad."
Meaning, there is no need for shame or embarrassment, he is a boy.

That literally translated itself into all sort of liberties, mini-freedoms handed to the boy because "makoo aleh harraj", because he would not cause shame or embarrassment.
Unless he deflowers a girl and gets her pregnant, that was the only red line. And even then, he would get away with it.

So his desire, his pleasure, his sexuality is no cause for "harraj", for shame or embarrassment, but the girl's was/is.

She was/is expected to hold up the virtues and morality of the whole family, of the whole clan, the whole tribe and this virtue and this morality lied in her honor, i.e between her legs. Crude as it may sound, but so true.

In consequence, her desire, her pleasure becomes a cause of not only shame but danger to be controlled at all costs, since she is the repository of Virtue and Honor.


End result is the same - Women need to be controlled, to safeguard that one basic thing - the honor of the family, the clan, the tribe, the society. Whichever way you look at it, the end result is the same. Either by reinforcement or by exclusion in order to bring back into line...

And here are planted the seeds of a misogynistic patriarchy.

I realize that this might come across as a theoretical mind fuck for most, but for instance I can point out the many instances of the practice of female excision/circumcision in what was considered predominantly matriarchal societies. Go and explain that if you can...

Hence my distancing myself from Western feminists...And that is not the only reason. But I would like to dedicate a whole post to the Western feminist one day...but not tonight.

Tonight I want to concentrate on the prodigal son.

This prodigal son has a very peculiar relationship with his mother. His mother is probably the only woman in his unconscious that defies all stereotypes of what a woman is or is not. I am sure you have heard that one often. "Toutes les femmes sont des salopes, sauf ma mère." -- All women are bitches except my mother. And some would add, "surtout ma mère" --especially my mother. At least they are in touch with their hatred here and have broken the psychological taboo. So maybe there is hope, after all...But I would not hold my breath.

I remember an Arab guy I dated, who had to sleep in his mother's lap at age 27, even if it was for a few minutes, every morning...

Good God, how can I ever compete with that one ? (cracking up with laughter here)

You must admit, it is impossible. Right? Yes right. Who can compete with the all loving, all engulfing, all controlling matriarch that rules the Arab male's psyche ?

No woman can. Unless she becomes a bearer of prodigal sons herself...

See what I mean ?