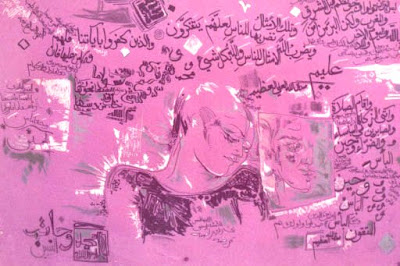 I am very tired but I am overtaken by this urge to write about "O", a dark story, with missing pieces, yet so plainly obvious. It is actually so obvious, that it is difficult to see.

I am very tired and writing about "O" may relieve some of my mental fatigue. Maybe writing about her story is exorcising parts of mine. The cast and the characters may carry different names, but the demonic shadow that moves them is essentially the same.

Maybe I still refuse to see the connection, what binds us together, that same wave that has engulfed both of us, by surprise, each in our own way.

Or maybe I do see it too clearly and that clarity scares me for it will lead me to deeper truths, truths that will shake whatever leftovers of a foundation I may have kept nursing, about humans, humanity and men.

Or maybe realizing her truth, I am thrown back to mine, and where will I escape once that happens ?

Can I really afford to stand naked again, undressed, exposed and totally vulnerable ?

Can I relate to you her story without undressing and exposing her again ?

A difficult choice. It feels like some things are best left unsaid, buried, leaving others to guess. And at times, it feels like, expose them even more, let all hell break loose...with the hope of a conclusive and final catharsis.

I am very tired and am oscillating between the private and the public. Between carefully protecting and screaming it out loud...

I meditate on my choice of a title - The story of "O". Her name does start with "O".

I remember a novel circulating many years back, some Marquis de Sade version of brute sadism, bearing the same name. I suppose it was consensual. But not with this "O". Nor with her nor with her younger sister.

An intimate sacredness transformed into a mute silence, as if the inner no longer exists and only silence can fill the void left in its place.

And the few incoherent words are just like patches of a old blanket, coming from somewhere deep, from some corner where language used to have a function, where it served a purpose, and is now occasionally uttered by a mind that has fallen into a semi psychosis.

The psychosis affirms its grip on the last remaining symbol of her femininity - her hair. And even that is not spared. All her hair has fallen out. She covers her bald head with an ugly, cheap wig. Her sister just sits there in a corner like a mummy, ancient yet so young, embalmed in a thicker, catatonic silence.

"O" looks ashamed, embarrassed for being there, here. Ashamed for still being alive.
She is in need. Dire need. All kinds of needs. The most urgent is food and shelter.
This basic need takes up most of her time, maybe a blessing in disguise, at least for parts of the day...but at night, she just blends herself into the darkness, hoping to disappear before sunrise.

Her other needs have become so distorted, engulfing the little of any seeming sanity left.

Almost impossible to get her full story. She just said, they had a big house in an up scale neighborhood in Baghdad. She lived there alone with her sister. Twenty armed men dressed in black stormed the house. She inaudibly muttered, lowering her gaze into the bare dirtied floor, as if trying to become one with it, "and you know what happens to two women alone."

She was quick to add, with that same subdued voice, beaten into submission and with a trembling fear resurging in her eyes, that she also prays at the newly built Shia mosque next door.

By adding this last sentence, she hoped to appease her interlocutor, just in case...