The Roar of the Lambs - Part I 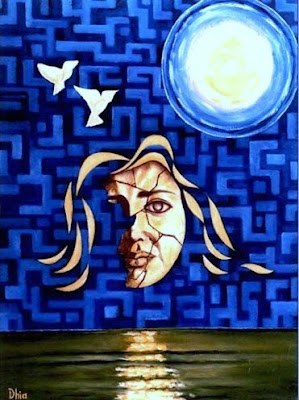 It took me some time to find the right noun. I first wrote Cries of the Lambs. But that struck me as too, too...resigned. Then I wrote the Scream of the Lambs. And that conjured up the image of a knife going for the jugular of a tied lamb. Then I thought of the Shout of the Lamb. And that too came across as desperate as my previous trials...

So I settled for this one - The Roar of the Lambs. I like that one best.
Of course you will think to yourself, lambs don't roar. And I say to you, yes they do...they eventually do.

Today, tonight, there is enough distance for me to write about It. That was not possible yesterday, nor the day before, not even weeks ago, nor months...But today the impossible is possible - just like a lamb roaring.

The astute reader will immediately associate the title with "Silence of the Lambs" and you are correct in your association. I congratulate your fertile imagination and your intelligence.

Let me explore the roar even though parts of me are reticent...Something pulls me back and something even stronger pushes me forth...

Like a subject that has been objectified, I am experiencing the dynamics of having been faced with Psychopathy, with Torture. Experiencing the traumatic bond, the secrecy, the shunning away...the avoidance of the memory.

I will use the terms Psychopathy and Torture interchangeably...For me they are one and the same. They both derive from the same violent impulses that strive to destroy. Gratify and then destroy. A nihilistic destruction, where the subject turned object, becomes empty,void. Hence reflecting that same void that inhabits the Torturer.

The Torturer is almost always a malignant narcissist, a sexual sadist whose inner world is fragmented and all his actions will aim at fragmenting, disintegrating the Other, so as not to disintegrate himself. For the self of the torturer hangs on by a thread...you pull it and the whole patchwork made of old rags falls away...

The torturer is a very weak persona...but he knows it not but you know it now.

The object/victim may not realize it at first, but he/she does with time...and with distance. Provided that the object/victim does not succumb and remain stuck in the traumatic bond.

In the darkness of a room, a cell or anything else...Secrets need pacts of silence.
Break the silence, and the pact disintegrates along with the perpetrator.

At first it might be just a hiss you emit, or maybe a furtive tear, or maybe a shout of agony, or maybe a recurrent nightmare...That is fine, don't stop. Keep at it...Keep at it, until you finally roar.

The necessary, temporary, reconstructed post-violated Self is being dismembered again...allowing Healing and a new stronger Self to emerge. Keep at it.


Torture comes under different forms. Please don't take my words in a literal way, I dislike literalists. Take it as loosely and as largely as you can, or in as far as your mind can absorb - absorb the experience.

Each word becomes for me a healing drug, an anesthetic pill...a window allowing fresh air, a door of exit, a gate of freedom...

It is hard for a victim to tell the story. Telling is exposing and the victim has already been forcefully exposed, against his/her will, in more way than one...

I don't like the use of the word victim. It does not empower. I will use the word Subject turned Object. Because this is what torture under all its forms is all about.
The objectification of the Other. By turning the other into an object, you strip him/her of subjectivity. You rip away at all the attachments - home, family, friends, things, memories, cognition, references, anchors, values, beliefs...in sum all attachments to a previous Self.

The Torturer thus tries to create a new object, out of the previous Self, an object of Gratification. Objects are inert, aren't they ? And that is why you hear many torture victims repeating that sentence -- I no longer recognize myself.

They become automates, having been robbed of their own Humanness. They fall back on primary impulses...and even those are thwarted, twisted...leaving place for a disintegrated, fragmented, dissociated and depersonalized...remnant of a Self.

They regress and regress and in extreme cases they finally flirt with psychosis. And that is the aim of the torturer. Project onto the subject/object his own psychosis thus relieving himself of his own madness.

All of the above dynamic necessitates Darkness and Secrecy - Silence. This is the modus operandi of the Torturer. Secrecy and Silence.

I have mentioned on previous occasions, that for me, the personal and the political are one and the same. That the intimate and the public are flip sides of the same coin. That the private and the collective are reflections of one another...I speak as a Woman. I speak as an Iraqi. I speak as an Arab. I need you to hold on to that as you read along...


I prefer French to English when it comes to certain words. In French, Violence and Viol (rape) share the same etymological root. To violate is an act of violence, of rape...

Rape is not to be reduced to a forced sexual act alone. Rape must be understood as the prime face of Violence. All violence is a form of Rape. All violation is a form of rape. All rape is an attempt -failed or successful- at turning a subject into an object.

The word Integrity comes to mind. Violating the integrity of the Other. Violating means trespassing a boundary, a line, a frontier, a border. Integrity and its linguistic ramifications - integral, integrate, integration is the border red line. Violating means an attempt at disintegrating, fragmenting the Other. It is really as simple as that.

Something was whole and you try to break it into pieces...So you can retain the illusion of remaining a Master of your own dissociated, fragmented pieces...your own self.

A torturer will not try to fragment, destroy an already fragmented person. He will aim at someone whom he perceives as Whole. You must understand this. This is most important to understand.

A torturer by fragmenting/destroying someone that is whole - is really preparing the grounds for his/her occupation. Occupying the Other, can also be done on many levels. First he invades your territory with a story... As simple as that. Do you understand ?

Occupation of someone - be it in their person, home/family, country...necessitates first a fragmentation. A sort of waging of a civil war inside that person or home or country. This where the psychopath pits one side of self or of country against another, instating suspicion, doubt and paranoia and finally disintegration...psychosis, a psychosis reflecting his own.

The psychopath/torturer is no idiot. He studies his subject first. Studies them well and in a timely fashion. Then he plans and plots. Then approaches with stories, invented ones, fabricated ones to lull, lure or to win over...and if the previous approaches fail, he will resort to the use of sheer blind force.

This is how the psychopath/torturer operates. Be it an individual, a group, a government or a whole nation...

Everything can be turned into a weapon for the psychopath/torturer. Everything. This is also something you need to understand. Another dynamic you need to be aware of.

The psychopath will go to any length and use anything, absolutely anything, to reach his objectives. The objective ranges from your psychological/emotional annihilation to its extreme variant, your physical murder, your death.

The psychopath /torturer will assail you on any level he can. Mental/psychological, emotional, spiritual/religious, sexual and the final frontier is your body, your belongings, your home, your country - i.e the physical. He can operate individually or in collectivity. He will know no limits until he reaches his final aim, his ultimate destination - your destruction.

I have personally come across psychopaths/torturers in my life time. They have occupied my country and they have also tried occupying my body and my mind.

But all of them have common traits that you can spot, if you are diligent and vigilant enough.

They are people of the lie. They lie to themselves, to others and to the world.

Despite the "niceties", the facade and the veneer (whatever these are made of), if you dig, you will find a hard callous core that justifies and rationalizes away...and blames -- you made me do it, had you cooperated, had you not looked that way, had you replied swiftly, had you given me/us the information, had you not made me/us so angry, had you not refused me/us, had you...

If you dig deeper, you will find a sense of entitlement, of haughtiness and arrogance and a total disregard for the Other, because in his mind the Other does NOT exist.

And if you dig even deeper, you will find a disconnection and an incongruence that reveal a shallow, envious, jealous, void self...a terribly cracked object of a self, a Failed self.

And if you dig even deeper than that, you will find nothing but an abyss of bestial impulses, violence and wrath...By then you have reached Hell - His.

P.S: I use "He" for matter of convenience. I am aware that "She" is also applicable, somehow to a lesser degree...