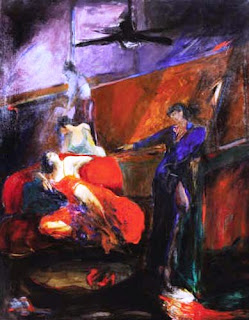 I thought to myself -- hell, am not going to sit around until everyone else is no longer busy. I am re-claiming the night, alone. Besides I've been in all day, making liberal use of A's computer -- all too myself.

This is not the first time I re-claim the night alone. I have dared it- so many times before, in whichever city I find myself in. I do not let the night deter me, even though those who claim to be her masters and who occupy her may act as some sort of a deterrent.

I always arm myself with the necessary psychological and other tools, just in case...But hey am a woman, and the night is my domain. I represent the moon and the darkness...The insides, the hidden, the obscure...is that not so ? So what is the hassle about a woman going out alone at night and claiming what is rightfully hers ?

I chose to go to a bar/pub, that I know relatively well. It is a relaxed atmosphere and people there are generally quite respectful and not bothersome. When am out alone, I like to sit at the bar, on those high stools. Maybe I feel safer there under the watchful eye of the barman...or maybe it is some sort of defiance, I am not sure...and it really does not matter what prompts my behavior, I was out there, and that particular spot and time belonged to me, for tonight.

Just as I was about to get ready to leave, my phone rings. I did not recognize the number, so I answered...It was him, it.

- Layla, I beg of you, don't hang up this time. I have to talk to you. Your voice revives me. Oh how I wished I did not say hello, maybe he could still be dying without my voice...
- Layla, I truly love you. Layla is silent and raises her eye brows to the ceiling and notices a spider's web...
- Layla, I worship the dust you walk on. Layla is dying to ask is that after you murder me and I turn to ashes and dust. But Layla is silent...A strange sort of silence, a cold silence, very cold silence that actually gave me chills.
- Layla, say something for old times sake. Layla, please...Layla listen, am running out of credit here, why don't you call me so I can explain to you...

At that point, the cold rage simply hung up on it.

The gall ! Not only this thing was vicious, vile and violent but he also had the audacity to ask me to call him because he was running out of credit ! I shook my head in disbelief, then remembered that I shall not waste more time on that creep, the night was awaiting me and I did not want to be tardy with her.

So I got to where I was supposed to be. Chose my seat. I glanced around me, to assess...just a glance or two, to evaluate the "atmosphere".

As I was making myself comfortable, I noticed a guy standing at one end of the bar, not too far off, staring at me. I must admit, he was quite attractive.

And he kept staring and staring and I could sense his stare from the corner of my eye. Then he lit a cigarette and I noticed his wedding ring. And I stared and stared and stared at his right hand. He felt my stare and pulled his hand away and tucked it in his pocket - the idiot. I wanted to crack up laughing but I moved my stare at the perfectly lined up bottles in front of me and loudly giggled inside of me...

Then came an African lad, manifestly drunk. He did a Michael Jackson stunt dance, even though only Jazz was being played...He kept at it for a while. He was trying to be impressively "cute" while in fact he looked ridiculous. I thought to myself just because a half black man won the elections, is that a license to try to become the center of all attention. I really wanted to crack up laughing again, but I just smiled and loudly giggled inside of me and looked at the perfectly lined up bottles instead...

After a while, landed another one, he pulled the stool next to mine, and kept a relatively ok distance, which allowed me to breath unhampered by too much close proximity. I thought to myself, give him a few minutes and a classic line will be thrown your way. And true to my expectations - he politely said :

- Do you mind if borrow your lighter, I forgot mine at home.
- Sure, you may even keep it.I have another one. Hoping that will not give anymore excuses to address me. No such luck.
- So are you visiting ?
- Yes.
- First time?
- No.
- Do you like it here?
- Yes.
- Can I offer you a drink ?
- No thanks.
- I am a student by the way. A social science student.

I thought to myself this guy can't be a student, he is well into his late 30's - unless of course, he is a very late bloomer. Then I thought to myself again - take it easy on the guy, girl, he looks harmless, and what have you got to lose ? Let him have a conversation...it's not like you are obliged to date or God forbid, marry him.

- Oh! a student. Which exact field in the social sciences ?
- Right now, am taking a course in gender studies.

I must admit this is a novelty of a line. None of the classical ones -- I need a lighter, what time is it, have we met before ? sort of nonsense...

He swallowed hard and I saw his Adam's apple go up and down...

- So what are you teaching, which aspect of gender studies ?

- And what were your initial findings ?

- The females were quite enthusiastic. They wanted to know what it felt like being in a guy's head. They also wanted to experience what it must feel like not to have so many limitations imposed upon them and they were dying to experience what it must feel like to walk into a bar alone and pick up girls and what kind of lines they would invent to "score" for the night.

- And what was the males reaction ?

- They felt awkward doing this imaginary exercise. One said he was willing to be a female as long as he could shop as much as he pleased. The other wanted re-assurance that he would still find himself a "man" after 48 hours. Another one was quite worried about being a female and then having some jackass harass him and he would not know how to defend himself. Another one said he would be willing to play the game as long as he got to be a "bitch" for 48 hours, and as long as he did not fall in love with any of the guys he bedded...

- You must be an interesting professor, he muttered rather perplexed.

- Only when I want to teach some memorable lessons...

It was time for me to leave and as I preparing my exit, I said to the "student",

- Here you keep the lighter. It is a souvenir from me to you.

I took one last stare at the perfectly lined up bottles and loudly giggled inside of me.

I headed towards the door and the night was faithfully there, waiting to embrace me once again, in her obscurity...