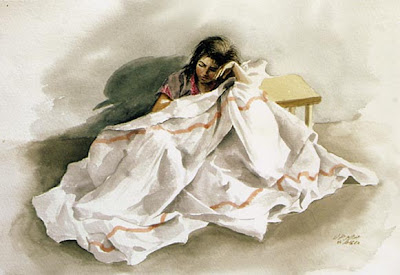 Frankly, the more I mingle with people, especially "en société", the greater my boredom...

Oddly enough, am hardly ever bored when am alone or when am with like minded people, for the most part, very close friends. Is this a bad sign or what ?

My capacity to tolerate nonsense is next to zero. OK fine, I can chit chat a little but that's about it.

It feels as if I am living in a different, parallel universe and people "out there", whatever that "out there" means are living in theirs...
A feeling of total estrangement.

This kind of schizophrenia can get a little scary at times. It feels as if all basic connections have been cut off. As if the umbilical cord that use to tie me to the presence of the "other" has been radically severed.

At times, my boredom manifests itself as some fidgety restlessness. At other times it's just my nodding my head and looking at the corner of some ceiling. And if you knew the number of ceilings I have memorized by heart. And sometimes it's me excusing myself for the 100th time to go to the toilet. I am sure the "other" has come to believe that I suffer from urine incontinence.


I remember once I was with two female friends and one of them, mentioned this guy who was really interested in her and she was not. She added by saying " but you know he is really nice - but when am with him am so bored what should I do ?" So this other female friend said matter of factly "Drink and you will find him interesting."

This piece of conversation never left me. But how much can one drink to digest the "other" is the question - short of requesting/demanding, some ethanol intravenous drip ?!

Take for instance this evening. A friend had a party, celebrating some thing or the other...not quite sure what it was - shows how interested I was.

And here is this 35 something man who proceeded to nostalgically tell me about his trip to France when he was 18. And boy, he did not stop.

Excuse me, but what the fuck do I care about his camping trip over 20 years ago in France ? I mean how is that relevant to me and to my life today in the year 2008 ?

Or take the other one, she went on and on about what a bastard her boss is, because he really fancied the secretary and he wanted to demote her so he can have the secretary instead, a "promotion canapé" sort of clip.

OK fine, I can understand that she feels upset about this asshole, but really do I have to listen to this shit for 2 hours ? I mean, how is that of any relevance to me ?

Fuck, I have been legally unemployed for so long, I would not recognize office furniture if I saw them, let alone a boss and a secretary...

How does all of that concern me ?

But there is a little difference here. X. can find other Babettes, Bernadettes and Georgettes on a new camping trip. Y. can change departments, bosses, offices or jobs...

But If I leave my "bubble" where will I go to ?

I guess my only "consolation", short of an adequate term, is to remember that another 4 million or so are stuck in the same bubble as I.

In all likelihood they are as estranged as I am and are thinking along the same lines - Where will we go to ?

Yes indeed, them and I are very stuck. And seems like we will remain so for quite a long time...