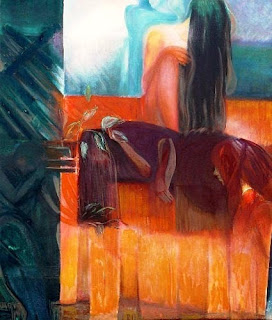 I am back in full gear and have even managed to convince all parties concerned that I am good with computers, and will not fuck up their "programs", ever. Promise !
So am "allowed" a few hours, until I go "home".

I don't feel like going "home". I am enjoying myself here. People are lively and there is a buzz in the air along with the pollution. There is lots I want to write about, but I only have two hands...

I wish I were some female octopus with so many tentacles, arms, I would write, write and write until I saturate all the pages...

How convenient it is to shut things off, to sweep them under the carpet, or hide them under some Western garment, or under some veil...

I was in some restaurant with some friends. I excused myself to go the "ladies".
And what do I find in the "ladies" room ?

A woman in some black traditional garb, sitting in the corner of the toilet floor, handing out tissues. A common sight in this part of the world, it is called masked unemployment. This woman lives off the tips that are given to her.

She handed me a tissue to wipe my hands, but she would not look in my face. She kept her head down and pulled a piece of her veil over one eye. She did not hide it enough. I saw one big bruise over one of her big beautiful brown eyes. A dark,ugly, blueish brown, brutish, bruise on her eye, whose colors were streaming down like a strangulated, coagulated, frozen tear, down her cheek, all the way to her jaw...

She had been punched. Punched by a husband, a brother or a father...

The French call it "l'oeil en compote". A sarcastic term to designate an eye turned into mash...a smashed, mashed, fruit...

This woman looked embarrassed, shameful, or maybe guilty...She was ashamed to show her blackened eye. What was she so ashamed of ? Him or her own powerlessness to stop him ? Maybe she felt shame about the outward signs of having been so humiliated and demeaned, a humiliation that trotted along her cheek with pride - his pride, his false pride.

Or maybe she was ashamed for him. So embarrassed to let the other know what kind of "man" she was living with. Was she protecting him ? Enabling him ? Or both ? Or maybe she was just covering up and trying to protect her own hurt ?

I don't know for sure.

All I know is that I felt a rage swell up in my belly...I was pregnant with a red hot rage and had that bastard of a husband, brother or father been present in front of me, I would have smashed that face of his, right there and then.

I am no boxer, and I don't have much muscles...I am a woman.

He would have probably punched me to the ground with one blow. I care not. I would have kicked his balls as hard as I can and maybe bit him so hard, digging my teeth in his repugnant flesh, reminding him of the animal that he really is.

Why do I say animal ? I am wrong here. He is no animal. Animals are much better. Animals are true to themselves. But alas, some men are not. They never bothered to find out who/what their true selves are.

This man is no stranger. He may be a brother, a father, a husband, a lover...He is someone with whom you had some form of intimacy. Some sort of familiarity. Some sort of love.

That is why when men proclaim out loud, that they want to protect women with their usual -- I am your protector, I laugh almost hysterically. I say to them - how can you protect me when you are the one who attacks me ?

Where and to whom do women have to run for security ? Short of learning some martial art or some self defense, against their own -- closest and dearest. My God the irony is too much. But it is not funny at all.

What is worse than a macho man, is a failed macho. A macho will bark like a rabid dog, but he is tameable. I know so. He will keep pretending but never mind, you are the one who holds the whip. And with every macho comes the appropriate whip.

Let me give it to you straight -- you men, flexing your muscles in our faces.

But taking it out on someone who is weaker than you physically is COWARDICE.

Cowardice means that you are a failure of a man. That you have no bravery and no strength whatsoever. It means to me that inside of that little self of yours, you are nothing but a rag doll. What they call in Egyptian-Arabic dialect "ragel kheekha". A man so soft inside, akin to a worm. A spineless insect, with no backbone. A loser.

And I like that word backbone. It is actually one of my favorite words. It denotes verticality, standing upright, elongated stature, head proud, integrity -- A Man.

Don't get me wrong here,I do understand that Testosterone is active and needs to be "worked out".

Go hunting, do some sports, or go defend your women and kids...Go and fight for your rights and those of your community or society. Go and defend your territory and push out invaders if you can...

What is the difference between you and the invader/occupier ? This latter flexed their muscles on a weakened country - land, weakened by sanctions and poverty...

Did they take on someone of equal power to wage their wars of occupation ? Of course not. They chose someone who was fragile and vulnerable through years of constant harassment, assault and attack...but who still managed to remain whole. And they savagely attacked Her.

And you do the same.

And you speak of victory ? What victory ?

Cowards, cowards and nothing but cowards.

Shameless bastards that you are. Shameless and shameful. Wallah - by God, even spitting on you is a waste of saliva.

What futuwwa, what chivalry ? What disappointment! What derision! What a rag clown!

Images of my wonderful grandmother are flashing back, like some black and white film...

I remember when I was growing up and I had just "discovered" boys, I would run to her and seek council. I would give her details of who he was, what he said and what he did...

She was so clever and so smart, my grandmother. She always heard what was not said... she was on the look out for omissions. She was always on the lookout for the failed gaps, the failed words, and the failed acts...

So she puffed on her cigarette, raising an eye brow and before uttering one word in my direction, she would throw a glance at whatever she was wearing on her feet - could have been a shoe or a slipper.

She gave me the message early on about failed men.

What I retained is rather rudimentary and may come across as obfuscated, but I will share it with you nonetheless - the Iraqi Female way.

Look down at your feet. And if necessary grab whatever it is you are wearing on your foot, preferably a shoe and simply throw it very hard -- in his direction...
We call it in Iraqi/Arabic dialect - Bil Kundara or in Egyptian/Arabic - Bil Gazma.

Failed men deserve nothing less and nothing more.

To accompany you, I am posting this very old Iraqi folk song, about 150 years old, before you were even born, about domestic violence interpreted by Elham Al-Madfai, in a newer, "modern" version.

I am not too crazy about the video. I don't like to see failed Westerners doing a failed "oriental dance", but does not matter. The juxtaposition of images are enough for me. And of course, the lyrics - which I have no time to translate for you.