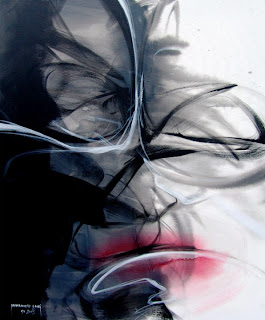 Went with Z.and Co. to our usual place. Unfortunately this place is full of expats - meaning Brits and Americans.

I usually prepare myself psychologically before heading there. Not because I don't like Ali the barman or the place - but because I know, almost invariably so, that I will hear, see, witness some American, British piece of shit - pontificating.

Across from our table - like 7 tables apart, was this wench of an American "woman" with her brother, "touring the country".

Reminds me of this joke about this Jew landing in some airport. The customs officer asks him

- Occupation ? (as in profession)


Getting back to this wench and her voice. Trust me - it is ugly. Very ugly. North or South, East coast or West, it is fucking ugly. And loud. Very loud.

It's as if you guys have a chronic inflammation of the sinuses. A mousy, squeaky, meowing, drawled out, shit coming out of your mouths...

I heard the whole bloody conversation.

If I were a guy, and had a "woman" like that, sitting across of me , with this nasal shit, I'd remain LIMP for the rest of my days... For as long as am exposed to this horrid, horrid, nasal accent.

Take heart, it is reversible - the limp bit. Provided that you have not been exposed to it for too long. Arab American "men" are beyond repair, though. Pity.

Never mind, you still have that old archaic castrated ego, to make up for it - when it comes to us - Arab women.

Fortunately am no guy. Am only a very angry Iraqi woman, ready to blow off any one's head.

Blame it on my PTSD. Hey, I am entitled to PTSD too!

Ah yes, that American wench and her "bro touring the country"...

She started chatting up this North African wanker. Ali told me he's from Morocco and is working for an N.G.O.

The conversation went as follows. I heard it because your "women" are too fucking loud - nasally so.

Hiiiiiiiiiiii, ya' got a lovely country.(me thinking oh no, they will fucking colonize the place) my name is X. and this is my "bro" Z.

Her overweight "bro" was wearing an XLLL t-shirt with a cap in the middle of the night. He just drank beer after beer and looked so fucking miserable.

- Geeee, Morocooow. Kewl place. My mom's been there. She's kinda international. She's been to Paris too. Ya' know, Champs Elyzeez nd all !

The Morroccan nods his head in great understanding.

- I tell ya somethin'. The only good places to visit in the States are N.Y, New Orleans nd Californyyyyaaaa. Ya know somethin' else, I "cried" when Bush was elected two times, man. But lemme tell ya somethin' Sadam (as in Saddam) was barbaric. So I guess it's not thaaat baaad after all...

The Moroccan sheep nods his head and gulps more of his beer...

He offers her a cigarette.

She inhales her cigarette, and so do I.

I see their barbarity written on each and every face of theirs...
I see them "smokin us out" and fucking our kids, women and men. I see their shaved heads and their fucking ugly tattoos and their stinking breath and body odor, I see them shooting us like flies. I see them smashing our doors in the middle of the night and that body odor and that fucking obnoxious accent that refuses to leave me. That obnoxious accent that has lodged in my ear drums, like a fucking squeak. like a meowing cat on heat - meeeeoooowwww.
Like some shit, techno, rap, sound coming out from a Humvee, where those armed pimpled shits of yours nods their heads to the rhythm, like some moronic retards...

Z. sensed me going away in my head...

- Layl, (he calls me Layl as in pure night instead of Layla)- is everything alright?
- Am suffocating Z. I want to get out.
- What happened ? Sorry was too busy talking to R.
- I want OUT, and now.
- Okay, okay, we will leave.

On our way out, the Moroccan wanker said to me in Arabic

I heard that ugly nasal shit voice follow me into the street, with: